Connecting America’s Reconstruction Era and the Crisis in Iraq

“The current crisis in Iraq explained in under 5 minutes. There is war in Iraq? Again? And the US and Iran are talking about working together? And who is this ISIS Terrorist group that is all …

Provide students with the “Cog in the Machine” handout, found online which provides them with quotes from recent Times articles about “machine politics” and “pay-to-play politics” in Illinois and asks them to work in pairs to define each term.

“In this lesson, students practice research skills and evaluate sources based on reliability, authority, and relevance. Students use these skills to complete research on a specific individual and his/her role during American Reconstruction. Based on …

“In this lesson, each student puts himself/herself into the shoes of a museum curator. The teacher assigns each student a primary or secondary source dealing with an event or individual from the Revolutionary War era. …

“During the Great Depression, The Farm Security Administration—Office of War Information (FSA-OWI) hired photographers to travel across America to document the poverty that gripped the nation, hoping to build support for New Deal programs being championed by F.D.R.’s administration.”

Thinking about the quote that starts this post, it could be interesting to have students search the Photogrammar archive of Great Depression photos and then use one these photos to create an advertisement for specific new deal agencies that they choose or have been assigned.

Along with choosing their image, students would need to justify their choice of image by answering the following questions:

This archive, or any of the other historical interview database from the Great Depression, could lead perfectly into a lesson where students create their own research questions for the time period as if they were interviewing an individual who lived through the Depression. The students could research the answers to their questions and record an “interview” with that individual. You could even use some neat green-screen effects in order to bring the era to life.

Additionally, students could compare these interviews with interviews of individuals who were impacted by the recent recession in order to compare and contrast the two eras.

This database in particular (due to the number of interviews available) also lends itself well to an introduction activity to the unit. Assign each student one interview to read/listen to and have the students complete a graphic organizer for the “causes,” “effects,” and “government responses” for the Great Depression. After taking notes individually, students could combine these notes in a collaborative GoogleDoc for the entire class and discuss similarities/themes between the various interviews.

The teacher could use this interactive map to introduce the topic of the New Deal to his/her students. Before providing direct instruction on the New Deal, show students how to manipulate the data in the map via the search features and then ask students to discuss the following questions:

This map could serve as a jumping off point for research on specific New Deal agencies and provide students with a local connection to the Great Depression and New Deal.

Play the “old school” version of the Oregon Trail video game! Students could use this game to answer the following questions:

Students could even answer these questions in first-person point of view by creating “diary entries” of a mid 19th century pioneer . The students could create this diary in a Google Earth virtual tour or use Google’s tour builder to get a sense of the Oregon’s Trail’s geography (similar to this resource/lesson idea). 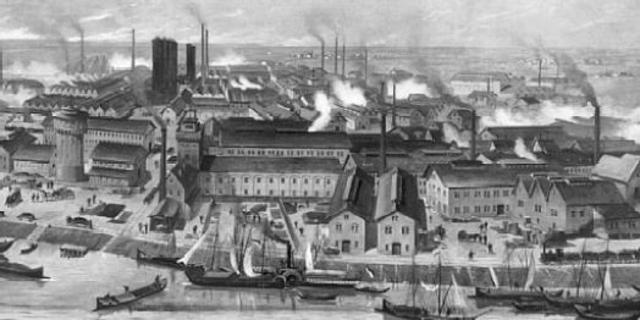 This is a sample use for the tool, Juxtapose, which allows the user to compare/contrast two images by moving slider vertically or horizontally. This is a great tool for any activity where you want your students to compare similar before/after pictures or where overlaying two images could be useful for another instructional purpose, such as vocabulary instruction. The sample questions below could be used when teaching the word “industrialization” to your students:

“This 1908 map depicts the negative consequences of drinking and ungodliness, using an imaginary set of railroad lines, states, towns, and landmarks. The document was a conversion tool, meant for use by devout people hoping to win others to the path of righteousness.”

Have students analyze the map and provide specific evidence from the map to answer and discuss the following questions:

As an extension activity, students could research the effects of Prohibition and create their own “map” from the point of view of a supporter of the 21st amendment. To prepare the students for this task, ask the students to discuss the following question

World War I in Photos – The Atlantic

“One hundred years ago, in the summer of 1914, a series of events set off an unprecedented global conflict that ultimately claimed the lives of more than 16 million people, dramatically redrew the maps of Europe, and set the stage for the 20th Century.”

This resource provides a photographic overview of World War I. This particular site, along with others like it, could be used as an introductory activity for World War I and help a teacher model historical inquiry. A teacher could briefly scan through some of the images and captions and discuss his/her thought process with the class. For example:

After modeling this thought process for the students, allow students to explore the overview on their own and develop their own questions. Students can then research the answers to these questions and present them to the rest of the class.

“The National World War I Museum’s online collections database allows you to search digital records of our global collection that began in 1920.”

This resource is a database of World War I sources, including original images, maps, and diary entries from the time period. I think the most interesting part of this particular archive is the random image generator that will pull 21 random items from the database and display these items on the screen. This particular tool could be used as an introductory activity for World War I and help a teacher model historical inquiry. A teacher could click the random image generator, briefly scan the documents that appear, and discuss his/her thought process with the class. For example:

After modeling this thought process for the students, allow students to experiment with the random image generator and develop their own questions. Students can then research the answers to these questions and present them to the rest of the class.

“From British prisoners of war being marched through Bruges to anti-aircraft guns on the Eiffel Tower and new recruits in Toronto, our Street View specialist takes us back 100 years”

Using this resource, and others like it (here’s another!), students can compare and contrast locations in today’s world with the exact same locations during World War I. I’m sure there are plenty of activities that lend themselves to this particular resource, but one in particular jumps out at me. Have students use these images to discuss “Why do many historians consider World War I to be the first “total war?””

“The Treaty of Versailles in 1919 was one of several to carve new countries from what remained of the pre-war empires.”

Original Source – How the first world war reshaped Europe: Redrawing the map | The Economist Posted from Diigo via IFTTT

This map provides students with a slider that they can drag back and forth across a map of Europe. The slider changes the view of the map from 1914 to 1919. This map could be used at various points within a unit on World War I.

BEFORE teaching about World War I, you could have students use the map to discuss:

AFTER teaching about World War I, students could:

A video of these geographic shifts can be found here.

Additionally, this link provides students with a similar map that compares Europe in 1914 to Europe in 2014. Students could compare the previous map with this one to discuss: